I am pleased to announce that Nelso 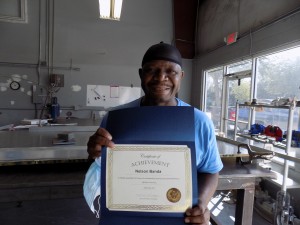 n Banda is the winner of the September Reward and Recognition Program!

Nelson Banda has become the BP ring set builder.  His attention to detail has reduced failures and re-work, significantly.   He has a sound understanding of how to cut the core properly, and fabrics, to lay in the mold to give us the desired parts.  Nelson is still able to produce the ring sets in a weeks’ time, despite not having the core cut by the laser, which something that was always done in the past.   Nelson is also able to reduce costs further on ring sets by completing the infusion on his own, something he was taught here, at Q4.  Nelson has also begun to make patterns, as he builds his fiberglass parts, to allow more consistency in our builds.  These patterns will be turned into templates the shop will use for years to come.  I look forward to watching Nelson’s continued growth.

To recognize this accomplishment, Nelson will receive a certificate of achievement as well as gift cards for dinner and Target.  Nelson is eligible for the President’s Award for Excellence which is announced in December 2021.

Please help me in congratulating Nelson Banda on this accomplishment!  Well deserved!